After the cancellation of the forest races in July, when the event had already begun, Portugal hosted the second part of the Junior World Championships with the completion of the medals for 2022.

From 4th to 6th November, the forest distances of JWOC 2022 took place in Aguiar da Beira (POR). For the Park World Tour Italia team the athletes Giulia Dissette and Annarita Scalzotto were confirmed again in the Italian team after a splendid second part of season in national competitions (see ITALIAN CHAMPIONSHIPS).

As is known, the races were scheduled for July 2022, but had to be postponed to this autumn due to a Portuguese government provision that prohibited entry into the forest for the entire summer period due to the danger of fires. Last weekend the forest distances were recovered (sprint races took place regularly this summer) with a noteworthy Portuguese organization with a good focus on media (live TV, GPS, live results, etc). 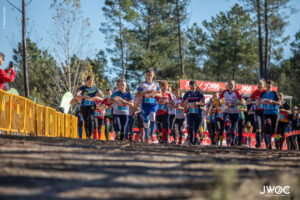 The Middle distance kicked off the international event, seeing the success of the Swedish Hanna Lundberg and the Hungarian Zoltan Bujdoso. For our athletes a tiring debut: Giulia Dissette is ranked 88 (+18: 18) while Annarita is 90 (+18: 22).

Saturday 5th was the turn of the Relay race, which saw both PWT Italia athletes engaged, with Annarita at the launch and Giulia in the second fraction. There race crowned the Swedish relays in both women and men, while the Italian women’s relay was ranked 16th at +37: 53.

The Long distance put an end to the event and, thus, also to the Junior 2022 competitive season. The women’s course put a strain on the athletes, with 7.3 km and 300 meters in altitude. Compared to the Friday race, both athletes improve their position, Giulia in 67th place at +28:04 and Annarita at 68th with +28:19 by the new Swedish champion Hanna Lundberg. In the men’s field it saw the victory of the Swede Noel Braun.

Giulia Dissette says: “It took me a while to regain confidence on Portuguese terrain, in particular I didn’t start very well in the middle and I made several mistakes that I could have avoided. Even though I didn’t run the best races of the season, I’m pretty happy with how I went through the week, forgetting about the mistakes made in previous races and thinking only about the present, gaining more and more confidence. This world championship has made me aware of what aspects to improve and I am ready to do so. It was undoubtedly a path that helped me grow and gave me the right motivation to face the next few years with determination and a new mindset.”

Annarita Scalzotto says: “I am not totally satisfied with my performance at the races, the Portuguese terrains certainly require a non-trivial technical ability, and an injury three weeks after the event did not help. Despite this, I feel I have improved on several fronts during this year of preparation, and I think this is the thing that matters most. I’m ready to end the junior season and focus on next year’s Elite events.”

In conclusion, the words of the team manager Gabriele Viale: “For me, playing these world championships in November did not make sense. As well as the economic distribution required for athletes to participate in the World Cup. From my point of view it was too intense a season for junior athletes. However, for our athletes it was a good experience of life and aggregation. Nothing else! “

For Annarita and Giulia it was the last year in the youth team, from the next they will begin to compete officially in the Elite. A recovery period is now beginning for the athletes, but in a few weeks we will begin to think about the 2023 season.