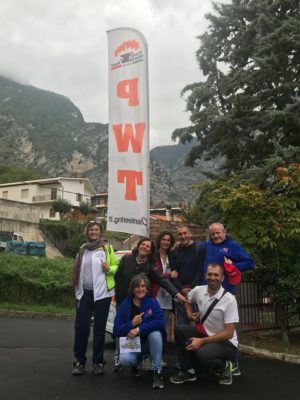 A particular group of orienteers at the Five + Five has one thing in common as well as their love of the sport: they are all deaf. After stage 5 on Friday 5th October we spoke to Brunella, who is an orienteering coach in the deaf community, one of two in Italy, and Isabella, who is the best speaker of the group and therefore sorts out all the administration such as event entries.

They are both married to other deaf orienteers. Brunella, who is now retired although spends a lot of time coordinating and coaching orienteering, has a son studying architecture in Lisbon who is also an orienteer and Isabella has a son and a daughter.

Brunella explains that she is here representing the community of deaf orienteers in Italy (FSSI) and that they are here for three reasons. Firstly, they like orienteering, they smile. Secondly, it is an opportunity to gather socially, both from all around Italy – Isabella explains that she is from Tuscany for instance whilst Brunella is from Trento – and also from outside Italy such as Latvia and Russia. Thirdly, they like the spirit of Park World Tour trips, which combine tourism with orienteering.

This week there were 16 deaf competitors taking part, including one junior in the M20 class. But, Brunella proudly describes, they managed to gather a number of deaf people in the local area of Abruzzo for two orienteering training sessions during the week. Some of them will go on to compete in Vasto next Monday, at stage 1 of the second week of Five + Five after Isabella and Brunella’s group have gone home. These people had never orienteered before so it is a really positive result to come out of their visit.

There are no special categories for deaf competitors – they compete together with non-deaf competitors. There are, however, championships for deaf orienteers. Isabella has competed in the World Masters Deaf Orienteering Championships for instance. Italy also has a bronze medallist from the 2017 Deaflympics in Samsun, Turkey: Luigi La Rose medalled in sprint orienteering (the first ever individual medal in orienteering, and 16 years since Italy’s relay medal) but as he has recently had a baby, his family are not at the Five + Five this year.

So are there specific challenges that deaf orienteers face? Isabella laughs – we have a healthy competition going on between the members of our group. About half of us take it quite seriously and are aiming to get into the National team to go to the European Championships and the others are here more for fun. But are there things that people who can hear don’t think about but can be hard for a dead competitor? Initially, Brunella says no; it’s very much a focus on using your eyes in orienteering, but of course, she adds, what can be hard is when the lights on SI units are covered in tape! Then as we cannot see the light flashing or hear the beep, we don’t get the feedback that we have punched.

And maybe that is similar when it is very sunny? Yes, Brunella agrees – in bright light it is also hard to tell whether the SI unit has registered.

Back to the Five + Five event – what has been the favourite stage of the week? For Isabella, she says with a grin, stage 3 on the open fells of Centomonti on Wednesday, as she was only a few seconds behind her coach Brunella! For Brunella, she particularly liked stage 5 as it was so technical, sprinting around San Martino and the forested stage 4 in Bosco di Cerasolo. But then, a lot of their group had really good performances in stage 1 at Vasto, so plenty to enjoy all week! They will go home after this stage but Isabella will be back soon to orienteering as her next events will be near her hometown at PWT Tuscany 2018 a few weeks away in November.

Brunella will travel around Italy more this year to hold weekend orienteering training sessions for children in the Italian National Deaf Association.

In sign language there are no new words specifically for orienteering, although the sign for “orienteering” is actually the same as for “compass”. The signs for map symbols are rather intuitive for words like “river” and “tree” (Brunella is pictured below signing “house” with Isabella) . The deaf competitors are the only ones able to communicate far across the lively event arenas with the sounds of cheering, music and talking being no barrier to conversation! PWT looks forward to welcoming more deaf competitors in future and wishes them the best of luck with inspiring deaf children to enjoy and take up orienteering. 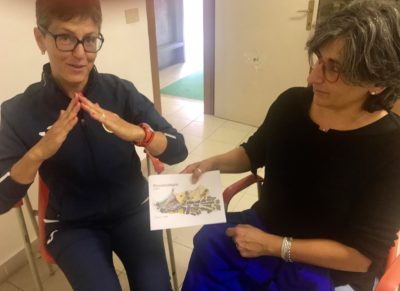