After a spring focusing on sprint for the first ever urban-only World Championship, it was time to switch the focus back to forest orienteering, as the European Championship was just a few weeks later. 3 PWT Athletes got the chance to represent the Italian Team: Annarita Scalzotto, Lukas Patscheider and Sebastian Inderst. Riccardo Scalet decided to skip this event to fully focus on the last round of the World Cup, that will be held on the same kind of terrains as next year’s World Championship. 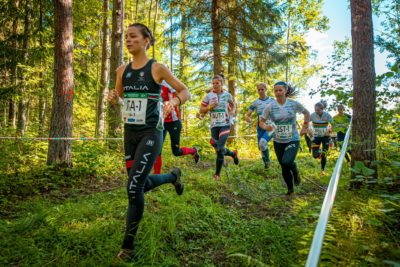 EOC took place in Estonia, close to Rakvere, in a terrain that can be very tricky: quite flat, partly rich in small details, and often the orienteering is made extra difficult by the dense vegetation that reduced the visibility considerably.
The first competition was the Middle Qualification, where the first 20 runners of each of the 3 heats would qualify for the A Final. Unfortunately, all the Italian runners did pay the lack of experience in this specific type of terrain, and committed a few mistakes too much, which made them miss the cut for the A Final…

Already on the next day though they were standing ready on the starting line for the Long Distance. It was predicted that it would be a though one, but that’s what the Long Distance is all about! Lukas had already decided to skip this competition due to a recovering injury. Annarita and Sebastian however were loaded and ready to fight! For Annarita the main goal was to gain some experience in this strong field, and with a stable race reached the 78th position. Sebastian has already quite some experience in his bag, so his goal was set a bit higher. For him a strong first half of the race, but then he started to suffer the heat a bit too much, and towards the end of the race committed a few big mistakes that costed him the top35, ending up in 55th position. 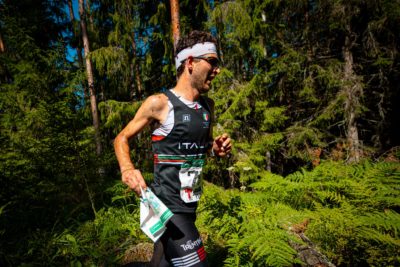 The competition with most suspense was kept for the last day: the relay! First off were the women, and Annarita got to run the first leg in the Italian Team. Unfortunately for her just a few controls into the race, she got a stick into her leg which then compromised her competition severly. She held fiercely up and fulfilled her duty anyways, and afterwards getting the necessary medication…we whish her a quick recovery! In the men’s course however, the Italian Team was in the fight for a good position all the way: Francesco Mariani did a good first leg, changing over only 2’ behind the lead. Then Mattia Debertolis on the second leg and Sebastian on the third one did a stable race, ending up as 14th nation, equalizing the result from last European Championships, even with the penalizing absence of Riccardo this time!

Now the focus is already set on the autumn races coming up, amongst the highlights will be the Italian Championships, where our athletes will try to confirm themselves at the top, before ending the season with the World Cup in Davos in the beginning of October!